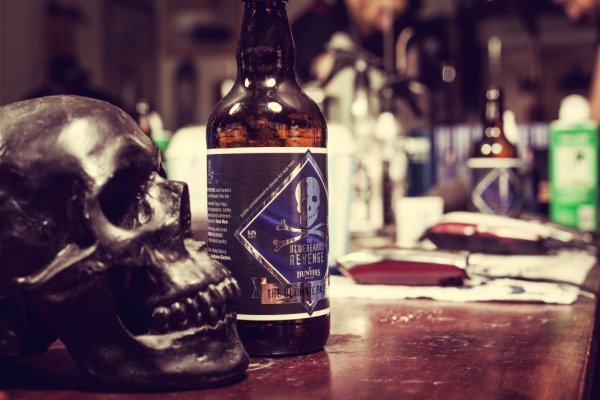 Premium men’s grooming brand The Bluebeards Revenge has broken away from industry norms with the surprising launch of a brand new beer.

Best known for its barbershop-quality range of shaving and grooming products, the brand has thrown caution to the wind with a brand new tipple dubbed ‘The Ultimate Pale Ale for Real Men.’

The new brew is the product of a unique collaboration between the Devon-based brand and local Hunter’s Brewery, and has already set tongues wagging ahead of its arrival in local pubs and bars later this month.

Made with Citra and East Kent Golding’s hops combined with the finest of British ingredients, the Ultimate Pale Ale is bottle conditioned, unpasteurised and unfiltered, with a strong, uncompromising and proud flavour.

Paul Walker, of Hunter’s Brewery, Newton Abbott, says that he was thrilled to be a part of the exciting collaboration. He comments: “I must admit, I was a little thrown when The Bluebeards Revenge first came to me with their idea, but it quickly became apparent that it was a golden opportunity. We’re very excited to be involved with the project, and are expecting The Ultimate Pale Ale to be very popular.”

David Hildrew, Managing Director and the brains behind The Bluebeards Revenge, explains that it had taken a lot of patience and determination to bring the beer to fruition. He says: “It would have been easy to get a white-label brewer to smack a few Bluebeards labels onto an existing brew, but that is simply not our style. We wanted our very own, unique beer brewed by a brewery with excellent credentials, and with a route to market so that our beer could be on sale in pubs and supermarkets across the land.

“We have finally struck gold in the form of Hunter’s Brewery here in deepest Devon. They have done an excellent job at making our vision a reality, and the result is very pleasing indeed.”

Troy Foods, a producer of vegetable, salad and mayonnaise, has expanded its operations with the completion of a fourth site. Supported by a £500,000 investment...
Read more