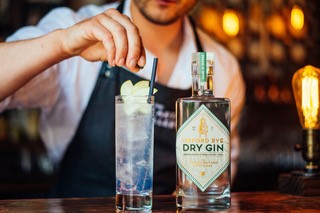 The Oxford Artisan Distillery, known for their commitment to sustainable farming and heritage grain, is delighted to announce that their multi-award winning Oxford Rye Dry Gin has launched into over 150 Waitrose stores nationwide.

Oxford Rye Dry Gin is distilled from the distillery’s own cultivated crop of heritage grains, developed exclusively for the distillery by their Head of Grain, archaeobotanist John Letts.

The distillery is one of very few distilleries that fully control its crop from the seed it plants to the use of super-sustainable farming practices.

The distillery’s heritage grains have been chosen for flavour over yield and have been painstakingly sourced and grown by Letts, from varieties that had been commonly used in Britain until the late 19th century. John has spent 25 years researching and refining the very best of them to help create the distillery’s top-quality Oxford Rye Dry Gin.

Growing in vibrant, genetically diverse fields, mostly within 50 miles of Oxford, their heritage grains work naturally with the land and soil, require no pesticides or fertilisers, meaning they’re great for soil health, biodiversity and restoring our ecosystems. This is achieved by the distillery’s absolute adherence to ‘regenerative’ farming, which not only avoids using all pesticides, but employs ancient, gentler, methods of land management – such as using clover to suppress weeds and sequester carbon and avoiding the immensely destructive effect of tilling a field.

Oxford Rye Dry Gin is a juniper-forward rye gin, with a classic combination of botanicals giving bold notes of juniper, pine and citrus, and a hint of aromatic spice.  It makes the perfect G&T using 1 part gin to 3 parts tonic and has won several awards including a Great Taste Award and a prestigious IWSC award.

Dave Smith, CEO comments: ‘We are delighted that Waitrose, a recognised British institution, has chosen to stock our class-leading Oxford Rye Dry Gin, supporting our revolution as we push the boundaries of what makes a truly sustainable spirit. We are on a mission to prove spirits production can turn agriculture from part of the problem to part of the solution; an aim which fully supports Waitrose’s own commitment to sustainability.’