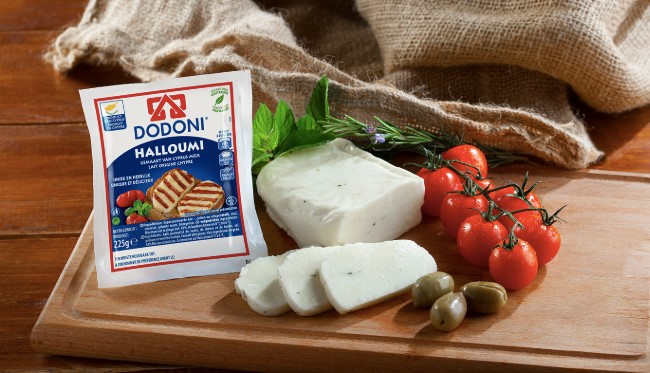 DODONI, the leading diary company in Greece, has announced its top of the range Feta and Halloumi is now available in over 200 Marks & Spencer’s stores across the UK.

Following recent news confirming that the exclusive trademark for Halloumi in the UK has been restored, giving Cypriot farmers an exclusive right to market their cheeses using the ‘Halloumi’ description, consumers can now be sure that the products they buy are authentic and made in Cyprus.

Produced near Limassol in Cyprus, DODONI Halloumi is made using traditional Cypriot cheese-making methods with a unique and distinctive flavour deriving from the exclusive use of 100% Cypriot cow, sheep and goat milk.

Halloumi has become a highly popular cheese around the world and with a consumption of close to 17,000 tonnes, the UK is the largest Halloumi importer in the world. It has a unique taste, strong nutritional values and is rich in protein. Exports from Cyprus have grown by more than 20% per annum in recent years.

Increasingly though, due to its popularity, copycat cheeses have been developed and sold under the same name – leading consumers to believe they are experiencing this traditional Cypriot cheese. These cheeses are often made with only cows’ milk and so take on a different flavour profile and colour to that of the authentic Halloumi.

Tom Seepers, CEO of DODONI, commented: “As a leading producer of Greek and Cypriot dairy products, at DODONI we welcome the news that the Halloumi trademark is back where it belongs. We collect milk from local farmers and use traditional recipes to make our Halloumi the way Cyprus has always made it – so it is important to us that consumers are able to tell the difference.

“Now that the trademark is Cypriot again this has been made easier and the consumer is guaranteed the experience that they expect, and be assured that they can enjoy quality, authentic Halloumi from Cyprus.”

DODONI is known throughout the world for being Greece’s leading Feta brand and their range of products are exported to more than 50 countries worldwide. DODONI follow the highest quality standards and have a strong commitment to sustainability, including purchasing milk exclusively from local, artisan farmers since 1963. In 2019, DODONI had a share in Halloumi exports of 12%.

UK food and drink exports for the first half of 2020 have fallen for the first time since 2020, a new industry report has...
Read more
Production

Benefits of the new Cobot from Phoenix Handling Solutions

The role of heat exchangers in apple juice processing

Although the volume of apple juice consumed by Europeans is fairly consistent, in line with market trends for other juice products, the value of...
Read more
NPD

An Essex-based drink supplier that was founded over a century ago has secured a £500,000 deal to sell its organic fruit juices to Japanese...
Read more
Launches

River Cottage has launched a new premium range of Kombucha as demand for the fermented wellness drink booms in the UK. The launch sees brand...
Read more

UK food and drink exports for the first half of 2020 have fallen for the first time since 2020, a new industry report has...
Read more
Production

Benefits of the new Cobot from Phoenix Handling Solutions

The role of heat exchangers in apple juice processing

Although the volume of apple juice consumed by Europeans is fairly consistent, in line with market trends for other juice products, the value of...
Read more
NPD