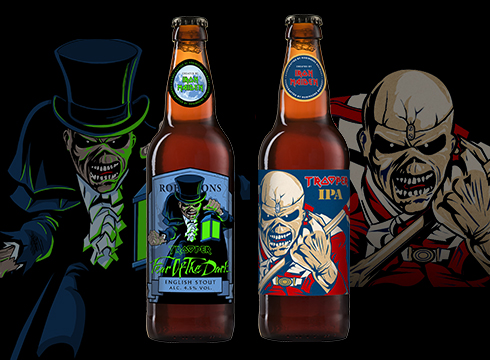 British heavy metal titans, Iron Maiden, have once again teamed up with Robinsons Brewery to launch the latest additions to its Trooper range.

The band originally teamed up with Robinsons Brewery back in 2012 for the inaugural Trooper beer sporting its undead mascot, Eddie. Since then, the range has soldier over 25 million pints around the globe.

New product launches have sustained the range over the years – including the addition of a sake infused beer last year – and now it’s joined by the seventh and eights brews.

Fear of the Dark is a 4.5% ABV English Stout, while Trooper IPA is a 4.3% ABV India Pale Ale. Both will initially be available via the Robinsons Brewery website before orders open via Amazon.

There’s no word yet on whether they’ll be stocked in supermarkets, but a press release says further details on available “will follow”.

The latest additions to the Trooper range have once again been developed by Iron Maiden frontman and real ale enthusiast Bruce Dickinson and Robinson’s Head Brewer Martyn Weeks.

Trooper IPA was inspired by American IPAs sampled by Dickinson at the Craft Brewers Conference in Denver, USA in 2019, where he was keynote speaker.

“I’ve sampled so many different styles of beer around the world on my travels with Maiden and it’s hard to ignore how big IPA has become, and what an exciting style it can be,” Dickinson said.

“I’m a huge fan of both IPA and Stout and they were the gaping holes in the Trooper range. I’ve lost count of the number of people who have asked us to do a Fear of the Dark Stout over the last few years.”

Weeks added: “An IPA is something we’ve always wanted to do with Trooper but had to wait until the timing and recipe were right. We are extremely proud of this brew which marries together familiar American hoppy flavours with a fundamentally British backbone.”

Fear of the Dark provides the first stout of the Trooper range. Rather than simply referencing the band’s 1992 album of the same name, the Fear of the Dark label shows Eddie playing tribute to Dickinson’s on-stage appearance when he performances the fan favourite song on the current ‘Legacy of the Beast World Tour’.

Trooper Brand Manager, Sam Kennerley, said: “Fear of the Dark is something fans have been begging for since Trooper was first released and we’re proud to finally be rewarding their loyalty.”

Farmers have been urged to consider fermenting their manure rather than compositing it to build better soil health. Trials have shown that fermenting waste in...
Read more
Health & Safety

Vitafoods Europe has been cancelled in light of the ongoing coronavirus crisis and will transition to a large-scale virtual event. The event was originally due...
Read more
Production

Farmers have been urged to consider fermenting their manure rather than compositing it to build better soil health. Trials have shown that fermenting waste in...
Read more
Health & Safety

Vitafoods Europe has been cancelled in light of the ongoing coronavirus crisis and will transition to a large-scale virtual event. The event was originally due...
Read more
Production