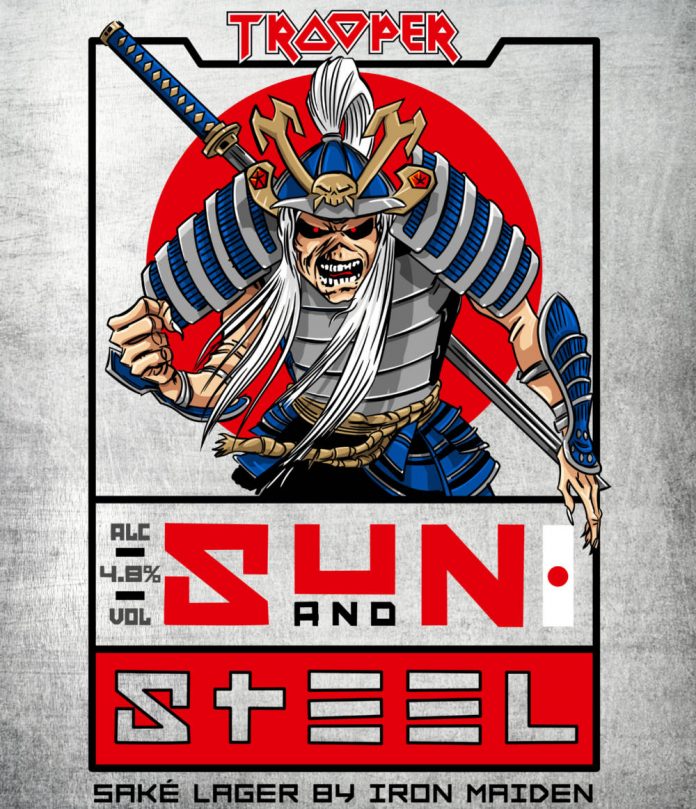 Robinsons Brewery has bolstered its range of Iron Maiden branded beers with the launch of Sun and Steel, a double fermented lager created with Japanese saké yeast.

The sixth addition to the Trooper range is a made from two yeasts. A lager yeast for the initial fermentation followed by a saké yeast for a second fermentation.

The beer has been once again been designed by Iron Maiden frontman Bruce Dickinson in collaboration with Robinson’s head brewer Martyn Weeks.

The idea was conceived back in 2016 following a meeting between Dickinson and George Yusa, a friend of the band and owner of the family-run Okunomatsu Saké Brewery in Fukushima.

Yusa provided a sample of saké yeast and after securing permission from the Japanese government, Robinsons have been carefully cultivating the strain ever since.

“This has been such an exciting project,” said Dickinson. “I had a crazy idea to try and make a sake infused lager and over two and a half years later, here we are.

“I know Martyn and the team at Robinsons have had to become mad scientists to make this work but the end result is a really unique hybrid beer that tastes fantastic. Trooper fans have been asking for a lager, and here it is.

“I bet you would never have guessed we would do it like this though.”

Sun and Steel is named after the song from the band’s 1983 Piece of Mind album, which was itself inspired by the life of Japanese Samurai Miyamoto Musashi.

The new lager will be available in the UK from 6 May to celebrate the Trooper brand’s sixth birthday. A worldwide launch is planned for later in the year.