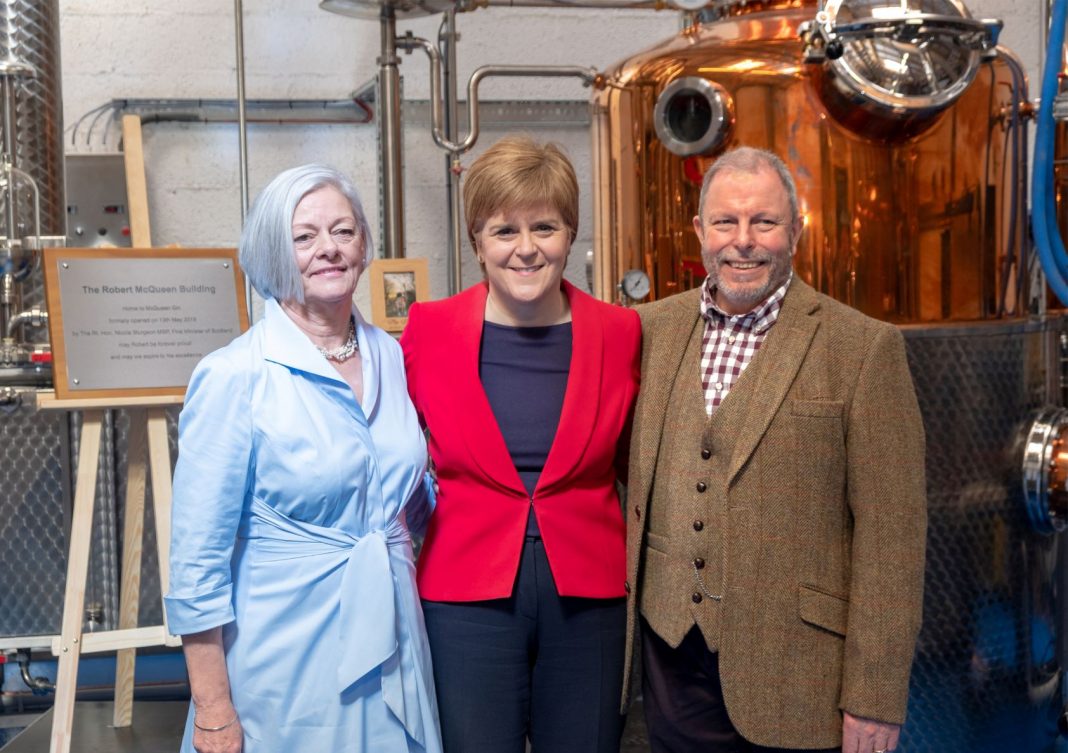 The First Minister attended the 6,200²ft facility today (Monday 13th May) to mark its official launch along with key stakeholders, customers and the media.  Having addressed attendees at the event, First Minister Nicola Sturgeon, commented.

“The impressive growth of McQueen Gin proves that it is possible with the right idea, product and people to go from a small start-up business to exporting around the world in a relatively short period of time – and that being rural-based provides no barrier to international success.

“I am pleased that Scottish Enterprise has been able to help the company’s ambition by providing support and expertise in their growth.  We want to be ambitious for Scotland and encourage private sector investment in a range of key markets, including food and drink.

“The formal opening of the new distillery is an opportunity to recognise the vision of the co-owners and the hard-work and dedication of the staff, and I look forward to seeing greater success as McQueen expands into markets around the world.”

As an increasingly popular creator and purveyor of intriguingly flavoured gins, McQueen Gin has achieved year-on-year revenue increases in excess of 300% since 2017. An investment of around £750,000 was made in the development of the new McQueen Gin facility, which will see their overall manufacture, bottling, packing and shipping capacity increase by greater than 1,000%. In line with their continued success and new distillery launch, McQueen Gin is set to create an estimated 15 new rural jobs in the area, as the brand grows its overall operation.

Speaking prior to the event, McQueen Gin co-founder Dale McQueen acknowledged the part played by the working relationship between McQueen Gin and Aldi in the acceleration of the new facility’s development. Speaking about the launch, he commented:

“The McQueen Gin growth strategy has been strongly supported by the Scottish Government through Scottish Enterprise (SE) and we are thrilled and honoured to be officially opened today by the First Minister of Scotland.

“Our strong working relationship with Aldi, both here in Scotland and UK-wide has been instrumental to our growth in the past 12 months. The ongoing regular business secured through that relationship has allowed us to bring forward expansion plans to this year, which equips us with the facilities needed to meet rapidly growing demand domestically and internationally.’’

“We’re very proud of the strong partnership we’ve built with McQueen Gin and the innovative products that have been delivered to market as a result. Aldi has been working with McQueen since November 2017 when they featured in our first ever gin festival, and since then the relationship has gone from strength to strength. Last summer we commissioned McQueen’s Forest Fruits Colour-changing Gin, which flew off our shelves. It was such a hit with consumers in Scotland that later in the year we extended the contract and now the colour-changing gin is available in Aldi stores across the UK.

“At Aldi, we’re proud to champion local suppliers and it is fantastic to see McQueen’s distillery expand thanks to the strong partnership we have built. I wish McQueen Gin all the best for the future, and I’m looking forward to working together on the next big innovation in the gin market.”

“It is incredibly exciting to welcome the McQueen Gin Distillery to the visitor experience in Callander.

“The opening of this new attraction in such a stunning location will certainly boost the wider region’s tourism offering. It is important that we continue to encourage new investment in tourism businesses such as distilleries which benefit from visitors’ love of Scottish gin, as well as the surrounding towns and villages, with the creation of new jobs and increasing visitor spend.

“This ripple effect means that tourism is more than a holiday experience, it is the heartbeat of the Scottish economy and touches every community.”