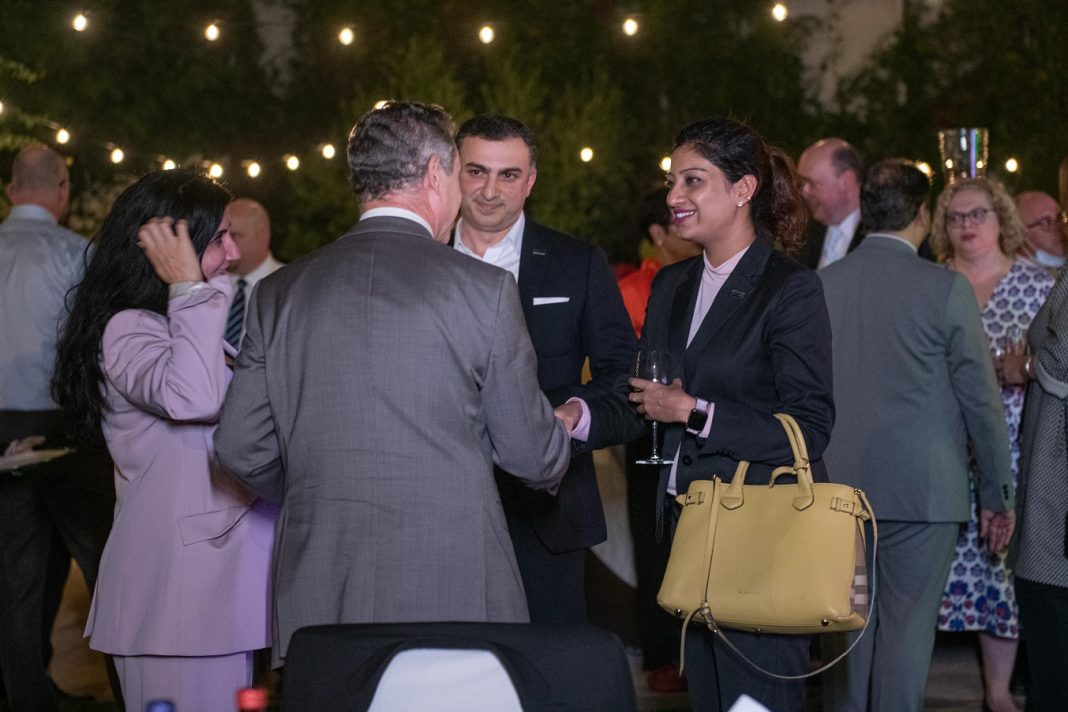 The Welsh Government’s Food & Drink Wales have held a Qatari reception featuring leading producers, as the countdown begins to Wales’ participation at the Qatar 2022 World Cup in four weeks’ time.

Held at the British Embassy in Doha and hosted by HM Ambassador to Qatar, Jon Wilks CMG, the dinner and showcase of Welsh food and drink kicks off a series of high-profile events as the Welsh Government uses the platform of Wales’ appearance at the World Cup to help raise its profile across the globe.

These include activities held in Wales, Qatar and the United States of America, with the Welsh Government’s World Cup Partner Support Fund providing £1.8m of funding to help share Welsh culture, arts, and heritage across the world in a bid to boost its economy and profile.

The Qatari market remains important for the Welsh food and drink industry, with it being one of the wealthiest countries in the world and importing the vast majority of its food requirements. Attending the reception were some of the leading figures in Qatari food and drink, including influential trade representatives from hotels, supermarkets and restaurants, with the aim deepening ties between the two countries.

Also present from the delegation were Welsh food celebrity Chris Roberts, who treated guests to a show stopping Welsh Lamb barbecue. Assisting him from Cardiff and Vale College were Tony Awino, chef and hospitality lecturer, and junior chef Joshua Campbell-Taylor, who were showcasing the opportunities offered by a career in hospitality and the wider food industry.

The event comes as figures over the summer show Welsh food and drink exports hit a record high in 2021, reaching £640m. Underlining the efforts to grow the export industry further is the fact Wales also had the largest percentage increase in the value of food and drink exports out of the four UK nations between 2020 and 2021, rising by £89 million and representing a growth of 16.1%.

“We are all very excited to seeing Wales at the World Cup, our first for 64 years. It also provides a great opportunity to promote Welsh food and drink to key buyers in Qatar.

“Our flourishing food and drink industry is a success story which belongs on the world stage.

“The products and businesses featured at the event offered just a snapshot of the quality we have to offer. The fact exports of Welsh food and drink continue to grow to record highs underlines the quality of our producers and how the industry is working hard to strengthen ties with trading partners worldwide.”

One of the lead partners of the delegation were Hybu Cig Cymru – Meat Promotion Wales (HCC), who are keen to grow their trade ties in the region further.

Qatar, along with other nations in the Middle East, has proven to be a fruitful market in recent times, with exports increasing and several high-end restaurants and retailers stocking Welsh Lamb. The value of Welsh Lamb exports to Qatar alone grew five-fold in the two years leading up to 2020 and there has been a 367% increase in the financial value of exports to Qatar so far in 2022 compared to the same period in 2021.

The event forms part of a wider promotion drive, supported by a grant of £97,000 from the Welsh Government, to raise Welsh Lamb’s profile in Qatar and the United States of America, which is a new key market following the lifting of an exporting ban earlier this year.

According to HCC, developing the market in Qatar and the wider region is a strategic priority. Jon Parker, Head of Supply Chains at HCC said,

“The Middle East is a high priority market for Welsh Lamb, alongside maintaining our valuable markets in Britain and Europe, and developing trade with Asia and North America.

“Lamb is a popular dish across the region, and because of the climate Middle Eastern countries have to import a lot of their fresh food. The catering and hospitality sector offers an important market for high quality meat, which has a strong sustainability story, and is an area where Wales has a particularly good story to tell.

“We’re grateful for the support from the Welsh Government in organising the event in Qatar, along with the wider funding around the World Cup, which allows us to raise the profile of Welsh Lamb further and help secure new markets and outlets for one of Wales’ premier products.

“Penderyn has quickly gained a worldwide reputation for our range of whiskies and we’re an outward facing company that’s keen to open opportunities in new markets. The fact that Penderyn is now available in over 50 countries is testament to this.

“We were only too pleased to be a part of the event in Doha, and we’re fully supportive of the Welsh Government’s goals to expand the horizons of the Welsh food and drink industry and to also capitalise on the opportunities afforded by Wales’ appearance at the football World Cup.”

Also at the event were the Stillers range of drinks from Old Coach House Distillery. Founded in 2019 with a desire to create wholly natural, alcohol-free distilled botanical drinks, Director Cameron Mackay said,

“Our products are sophisticated drinks that can be enjoyed as a great alternative to not drinking alcohol, while also having a number of health benefits.

“We feel that our alcohol-free products are a perfect fit for the Middle Eastern market, and we’re grateful for the opportunity presented to us by the Welsh Government to help us open new markets such as these.”