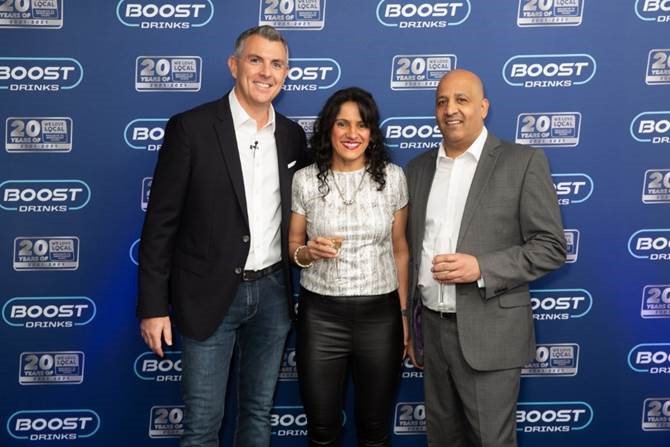 Leading functional drinks brand, Boost Drinks, has announced the winner of its ‘Local Legends’ competition as Julie Kaur, of Jules Convenience in Telford.

Selected from nearly 200 entries across the UK, Julie was revealed as the winner at Boost Drinks’ Platinum Party in London on Thursday 18th November and took home a £20,000 lump sum after being awarded the top prize.

Julie’s application stood out to the judges due to her being an ongoing key figure within the community through her valiant fundraising efforts. During the pandemic, she worked tirelessly to support her local community, taking it upon herself to reach out to the elderly and vulnerable by paying them visits and offering a delivery service to local residents who were unable to shop for essentials.

The event was well attended by various stakeholders, retailers, wholesalers, suppliers, and press contacts, and played host to the results of the ‘Celebrating 20 Years of Local Legends’ competition which marked the culmination of Boost Drinks’ 20-year anniversary celebrations.

The event celebrated the brand’s year-on-year growth over the last two decades and thanked stakeholders, wholesalers and retailers alike, for their continued support over the years.

Speaking of her win, Julie said: “It’s amazing to have been recognised by Boost Drinks. There were so many amazing retailers nominated so it’s a privilege to be announced as the winner. I was also incredibly happy to see so much diversity, moreover so many women shortlisted. I can’t wait put my plans in motion!”

Julie has lofty ambitions for her prize, which she plans on using to pay tribute to her roots by paying the money back into her community.

Julie wishes to increase the community outreach by setting up a community café and meeting area in her hometown of Telford, where 31% of the community are semi-skilled or unskilled manual workers, 25% of whom have no qualifications. She hopes the café will further enhance community spirit and help raise aspirations in the community from different groups.

Coming in second place and taking home a lump sum of £2,000 was Bob Singh, from Nisa Bramston, who plans to use his winnings putting on fun community events. Third place was awarded to Divyesh Patel who took home £1,000. He plans to put his prize towards expanding the delivery offering from his store, Tower Stores Off License.

Simon Gray, Founder and Chief Energising Officer at Boost Drinks said: “The competition really was the perfect example of Boost’s vision in action – energising everybody, in every way. I’m so pleased that we were able to come together to celebrate the last two decades at our Platinum Party after the challenging 18 months we’ve all had.

“Congratulations to all of the local legends who were shortlisted. It really was incredibly hard selecting a winner as we received some brilliant nominations and applications from across the country. There were some incredible stories to tell and we’re immensely proud of everyone who entered.”

The competition, which ran from July to October 2021, saw nearly 200 independent retailers across the UK enter the competition by completing an online application highlighting how and why they go ‘above and beyond’ to help their customers.

Retailers were encouraged to submit photos, testimonials and other supporting materials to give them the best chance of being shortlisted. The shortlisting was judged by a panel of industry experts including Jason Birks, Vice President of the NFRN, and a number of senior stakeholders within Boost.

The ‘Local Legends’ competition is part of a package of initiatives to celebrate Boost’s milestone year, including: multiple NPD launches, birthday breakfast boxes delivered to key trade journalists to provide a much-needed morning ‘Boost’; platinum certificates and gift hampers for trusted wholesaler partners; a consumer CSR initiative offering up to £20,000 for community groups; and in-house celebrations to recognise and thank Boost employees.