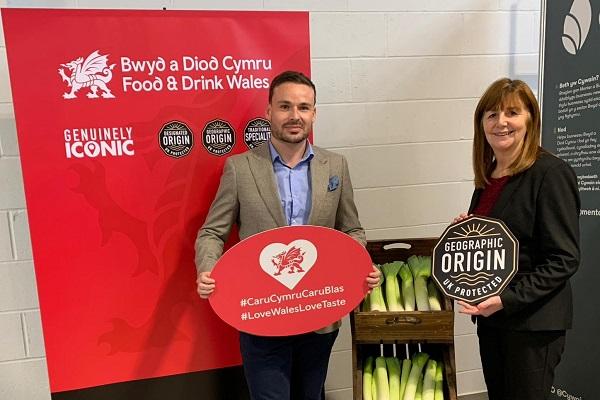 Welsh Leeks also becomes the 19th member of the Welsh GI family of products, joining the likes of other produce such as Anglesey Sea Salt, Welsh Lamb, Welsh Beef and Pembrokeshire Earlies.

The UK GI scheme was established at the beginning of 2021, following the UK’s withdrawal from the EU, and ensures certain food and drink products can continue to receive legal protection against imitation and misuse.

From now on, Welsh Leeks sold with the UK GI logo will promote the heritage and culture of Wales and provide the product and consumers with certification of quality and uniqueness.

The application for Welsh Leeks PGI status was led by Pembrokeshire’s Puffin Produce, who already have Pembrokeshire Earlies PGI under their belt.

Huw Thomas, CEO, Puffin Produce, said: “The leek is an iconic emblem of Wales – we are incredibly proud to be able to grow Welsh Leeks and the GI status is hugely important to promote the quality and heritage behind this majestic crop.”

Minister for Rural Affairs Lesley Griffiths said: “This is great news today and I congratulate all those involved in gaining this prestigious award for Welsh Leeks. Leeks are a historic symbol of Wales, known across the world, and I’m very pleased to see this product gain the recognition and prestige it deserves.”

Welsh Leeks are grown and harvested in Wales and are a product of several hybrid varieties, rather than one specific variety.

The hybrid varieties used to produce ‘Welsh Leeks’ are those most suited to Welsh growing conditions. They produce a final product which has its own specific characteristics, such as the predominant long distinctive dark green flag which comprises over 40% of the overall length of the leek.

‘Welsh Leeks’ are normally planted from late February through to May and harvested from August through until April/May, with some crops remaining in the ground for up to 12 months. The leeks can be left in the ground without affecting their quality, leading to slower maturation providing more time for the peppery flavour and buttery aroma to fully develop.